Christopher Brown continues to be a distinctly American artist. He depicts large and small scenes of life as it is lived, or partially remembered, in this country. Yet his scenes are grounded in one specific moment. Brown uses paint to allow for ambiguity and distance. Despite his masterful use of color, his pieces often feel cool. His interpretation of the Zapruder film of the Kennedy assassination is at least one layer removed from the event and so no longer as horrific. There have been bucolic backyard scenes, toy logs and farm animals, trains, and soldiers that stir memory but not passion. The imagery is highly personal to the artist’s life, yet accessible to many viewers because of its familiarity. The reworking of the paint, the smearing, smudging, and scraping, allows each viewer to build his or her own narrative around the frozen moments. Most of his work is representational, but no more prescriptive than the work of abstract artists. 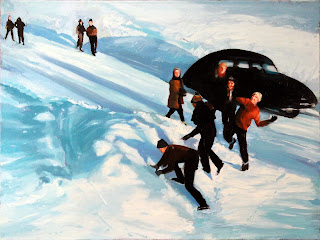 Each new show promises an examination, or sometimes reexamination, of imagery that holds special resonance for Brown. In the current exhibit at John Berggruen Gallery (through March 17), most of the paintings depict the near-ubiquitous weekend cycling tournament up a mountain (feels like Marin to me), the horse race from the unlikely view of someone behind the dirt kicked up by the animal’s hoofs, and a few stray images of ancient red coat soldiers, sailboats, and family trips to the snow. 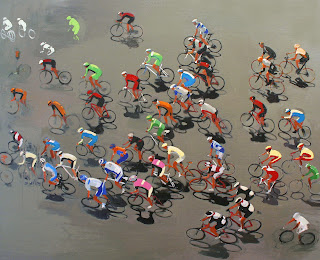 In the recent cycling series, dozens and dozens of thin circles merge into a near abstraction, like Monet’s water lilies. Amidst the hard and monotonous work of pedaling up a mountain are the bright jerseys of the riders and friends and hundreds of shades of green hills. One jersey was worked so beautifully I thought it resembled a miniature Rothko. Brown captures the tension between the vulnerability of the hard-pumping rider on a thin machine and the steep and dangerous curve. Half a redcoat soldier walking in the mud is not grotesque, but like a partial memory. When focusing on a ship’s great billowing sails, swaths of paint look like an angel’s wing. But I was most drawn to a smaller piece entitled “Blue Road,” in which a family or group of friends has stopped along the road to entertain themselves with a snow fight. Instead of resembling mounds of white, the drifts recall the eerie blue of gigantic glaciers. Brown’s paintings can take you anywhere, even back to the ice age, but more likely to your own past.