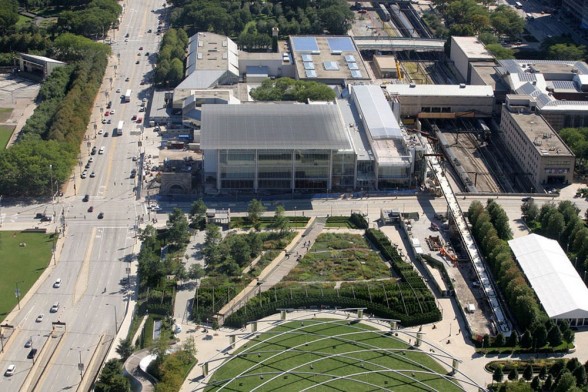 The Art Institute of Chicago and Millenium Park

Stepping off the plane, Renee and I were engulfed by an ocean of hot air. Ninety-five degrees and 103% humidity (as our waiter later remarked). We caught a cab straight to the Art Institute of Chicago and met up with Mark Pascale. Mark is curating a show of Martin Puryear’s works on paper and invited us to discuss the prints we’ve made with Martin over the last 11 years. Graciously, Mark gave us a welcoming tour of the newish Renzo Piano addition, including the spacious gallery Martin’s exhibition will occupy. The light in the new section is refreshing, with windows overlooking native prairie gardens.
Mark further indulged us by taking us into the cavernous storage rooms of the works on paper collection, where row upon row of large flat files housed works slumbering in a climate-controlled stupor. Mark opened drawers and unshelved framed works, rousing Lee Bontecou etchings printed by Tatyana Grosman, gigantic Russian war posters, a dog collage by Joan Brown, and a charcoal study by Kerry James Marshall that I will never forget. Next up was the conservation department, where we talked glue theory with the conservators and enjoyed inspecting all their work areas and tools. 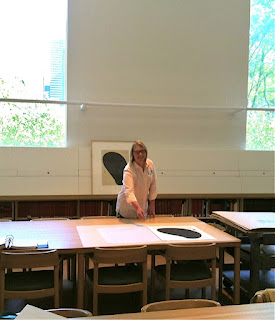 Pam Paulson in the Print Room at the AIC

Finally, we found repose in the study room in the company of “Profile” by Martin Puryear and kicked back for an overview of the material that has been gathered to date for the show. Last fall, we shipped 99 working proofs and miscellaneous ephemera from our projects with Martin to the Art Institute to document the process of making the prints. It is really amazing to see this idea for the exhibition take shape.
Exiting the museum, we swam over to Millennium Park, strolling beside smartly designed fountains full of hot Chicagoans cooling themselves in the mist.  We wound our way over to the fun house mirror, “Cloud Gate” (Anish Kapoor’s monumental bean) and around to Gehry’s Jay Pritzker Pavilion. All wows!Mark visited Martin a few months ago with Ruth Fine (curator of special projects in modern art, National Gallery of Art) and Harriet Stratis (head of paper conservation at the Art Institute) to take a look at his personal archive of works on paper. Martin studied printmaking in Sweden and made highly successful prints early in his career. Renee and I had glimpsed these early works the first time we visited Martin’s studio. It was great fun to be virtually reintroduced. 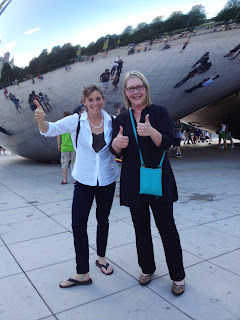 Renee and Pam infront of the Kapoor

The next day we looked at all the working proofs and the correlating edition prints, analyzing how we got from A to B. Not always easy to recreate, but thanks to usefully redundant documentation, we were satisfied we had it right. Mostly!

Later, after a quick walk to the lake, we met up with our old friend Stephanie Sherman for drinks and dinner at Gage, across from the museum. Stephanie (an amazing art professional) introduced us to the very handsome Billy Lawless, who owns Gage as well as Henri, its sister restaurant next door. We relaxed with a great cheese plate, fine martinis, a venison burger, and the fabulous staff. Then it was on to Henri for a memorable dessert at the bar.

Thankfully, the next morning, the temperature had backed down, and rainclouds mitigated the blazing sun. Skirting downpours, we paid a visit to Kerry James Marshall’s studio. Kerry is an amazingly productive individual. He has multiple projects in the works and then some. We were delighted to see several of his models, who closely resemble the one he worked with while in our studio. 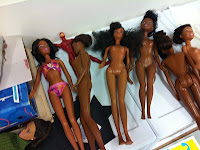 Of great interest to me are the costumes Kerry and his assistant have designed and sewn for his dolls/models to wear when he draws them. They intentionally avoid recalling a discernible time period yet remain oddly familiar. The use of oversized elements like buttons and textures from the ribbing of socks upends the expected.

We boarded the plane back to the Bay Area exhausted and inspired. However, we were certainly not as exhausted as this guy in Renee’s row. 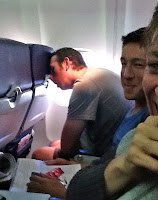