Berkeley is considered by many to be a bastion of the Slow Food movement. Alice Waters, Michael Pollan, and other local stars have challenged our need for speed. At Paulson Bott Press, we can relate. Making etchings is a methodical endeavor. The process demands tenacity. We often sow the seeds for projects years in advance. Once the artist is in the studio, we carefully tend the task of making the prints.  Sometimes the idea emerges right away and we refine, and other times it’s more trial and error. It’s Slow Art. 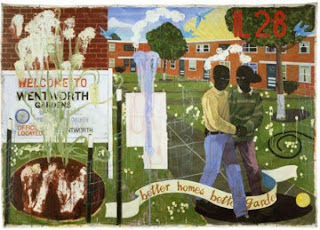 Our experience with the artist Kerry James Marshall is a case in point. When I first heard him speak, I was amazed. ( If you ever get a chance to hear him, do!) Renee and I had just begun to publish prints when we flew down to San Diego in 1997 to meet Kerry and invite him to work with us. I remember my enthusiasm for his painting and for the visionary path he intended to carve through art history. I also recall my dismay when he didn’t immediately agree to come to our studio that fall. We kept at it.

We began with a very ambitious large image. As a young man, Kerry had tried etching. He had in mind a myriad of intaglio techniques that he would use to create the print. We started with a softground drawing of the basic image, then added successive plates (with aquatints, spitbites, sugarlift, and drypoint) to flesh out the color, value, and density. “Vignette (Wishing Well)” relies on a smorgasbord of techniques, including chine collé and hand painting, and it is a testament to patience. The print comprises six plates made over a two-week period. 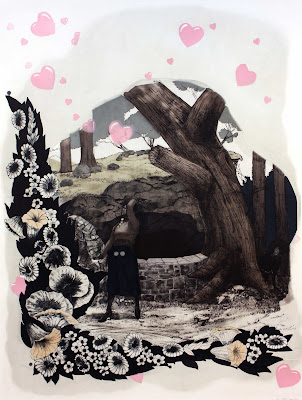 During the first week, we were working towards a brightly colored image. Kerry introduced the idea of shaped plates to reinforce the structural components in the print. We all had fun wielding the metal nippers to cut the pieces of copper that were needed.  While we were proofing, the color direction changed, and some plates were abandoned.
The multiple tinted greys required the plates to be inked “a la poupée” (several different colors inked on each individual plate). Four printers work 2.5 hours to ink and print a single print, and it takes an additional 1.5 hours to print hearts, chine collé them, and hand paint the prints before they are ready to be signed. 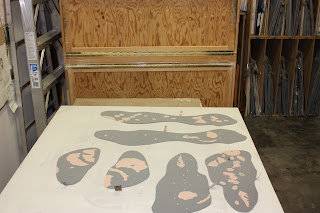 A single plate can go into the acid numerous times before reaching a final state. This is true of each plate making up the larger print as well as the single plate prints. “Untitled Woman” was rolled with hardground drawn on and etched nine times before we pulled the OKTP. 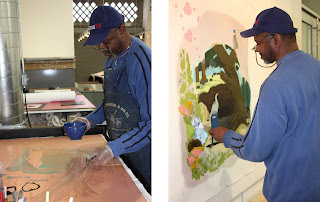 Kerry in the Paulson Bott Studio

Slow Art is an apt description of what goes on at the press. Even when we are running around in a frenzy, we cannot go faster than the process’s inherent physicality, we cannot rush the steps and stages and the resonance of the image and our understanding of what the artist wants. It took awhile for this project to take root, and once it began to grow, it flourished. I hope you will be able to take a moment and spend some time with Kerry James Marshall’s exceptional work.