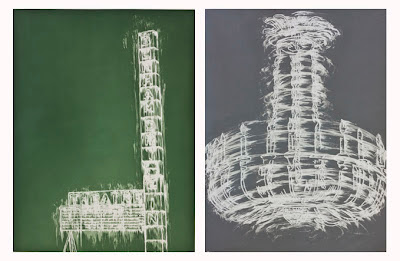 Some ideas take years to cultivate. Printers need a patient side.
In 1997 Paulson Bott Press was a year old.  We had several projects underway and were enjoying the exhilaration of starting a new business and achieving some success. In November of that year, Pam and I left our first studio in Emeryville for our second trip to New York to visit some artists.  Gary Simmons was the first person on our list; we had arranged to meet in his studio on a cold November morning. 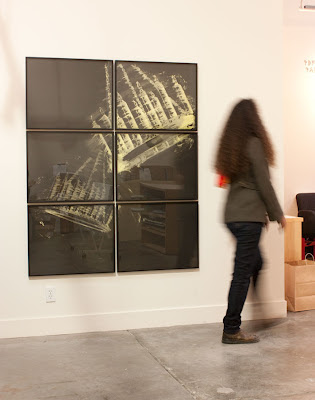 Gary’s studio was located on one of the many floors of a vast studio building in Chelsea. At that time he had an exhibition up at Metro Pictures. He said the next few years were extremely busy for him, but he would consider our invitation to come to the east bay and make prints.

In the years that followed, I was fortunate to see several of Gary’s exhibitions and installations. I always appreciate it when I experience a transcendent art moment. By this, I mean a moment when I connect to the work in a way that makes me want to remember what I saw, to remember how I felt when I stood in front of that piece. Gary’s installation at the Contemporary Museum of Art in San Diego in 1997 was a moment like that.

Directly across from the main entrance to the museum, I could see his work on the far gallery wall. I didn’t hesitate; the force of his work pulled me in. I paused before his installation Gazebo.  It was a breathtaking, larger than life drawing of a gazebo on a dark charcoal wall with Gary’s signature “erasure” of the chalk drawn structure.  It was like a wild wind had encircled the porch. Or perhaps it was a fading memory. Rife with historical references the work conjured southern mansions and formal tea along with echoes of the long civil rights battles still being waged today.

Years later, in the fall of 2010, I picked up Gary from the Anthony Meiers Gallery in San Francisco. He and his assistant folded themselves into my Mini Cooper and we headed over to our studio in Berkeley for lunch and a tour of the press. He was serious about our invitation; it just took him a while to get around to accepting it. 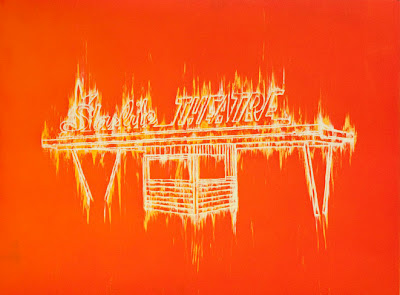 Gary was immediately at ease in the studio, experimenting with everything available to try out on a copper plate.  With his presence the studio instantly had a different energy, the printers curious and watchful, eager to engage with this thoughtful and talkative artist.  It is a great feeling to be involved in the moment of an artist’s creation. Discoveries are being made, mistakes are happening. The trial and error of working with a new medium gives way to something new and magical. 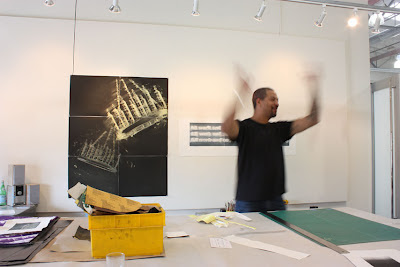 In November of 2010 Pam and I once again climbed the stairs to his New York studio.  We were in town to see the Armory Fair. By that Friday afternoon, we had already seen a whole lot of art and our feet were tired. The studio was pristine.  The walls were carefully arranged with his latest work, completed and ready to ship to Simon Lee in London for his opening there.  After the pandemonium of the art fair, Gary’s quiet studio was uplifting, like walking in to a cool cathedral on a hot summer day in Rome.  Pam and I sat down and admired his ghost ships and deck chairs. This was, hands down, the most exciting art we had seen in New York that week.

Gary worked at Paulson Bott Press for a week in the fall of 2011 and completed three prints. He came back for a few more days in January 2012 and completed the project, making three more images.  The first three prints reference Kubrick’s film The Shining.Two of the prints taunt us with the repeated type written line “All work and no play makes Jack a dull boy.”  The third, a large six panel piece depicts two ominously swinging turn of the century chandeliers from a scene of the hotel’s interior. Another related image is a spinning classical chandelier from a still of Hitchcock’s masterpiece Marnie . Simmons has a fascination with horror movies and related material including theater marquees, which are the subjects for two more of his prints. Images of the Bonham and Starlite marquees shimmer as if blinking out for the final time as they disappear from the American landscape.

Last month we returned to Gary’s studio to sign prints. We were delighted that the discussion touched on ideas for future projects. Gary explained that the process had led him to think about his mark making differently. That he had enjoyed the experience of spending more time in the space of making his drawings. Some things just take time.