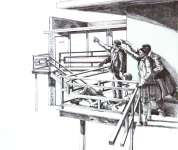 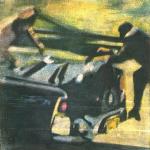 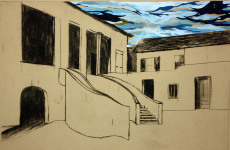 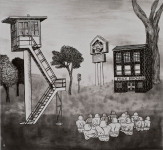 Perhaps it is the horror film genre that can best engage traumatic history and confront viewers with it. Gary Simmons’ All Work and No Play references Stanley Kubrick’s film The Shining. Simmons often uses metaphor and American popular culture to create works that address personal and collective experiences of race and class. In Kubrick’s film, there are several shots of Native American architecture, and the hotel is filled with Native American décor. The hotel, built on a sacred Indian burial ground, was haunted due to this desecration. Many theorize that the film is exploring the early American settlers’ exploitation and killing of the Native Americans.