Tauba Auerbach does not accept the obvious.  She likes to experiment, even to invert. During her recent visit to the press, she created a series of monoprints in which she focused on what the press does, on its power, rather than on how it fuses ink with paper.  Her goal with the monoprints, as with much of her work, is to capture evidence of process. 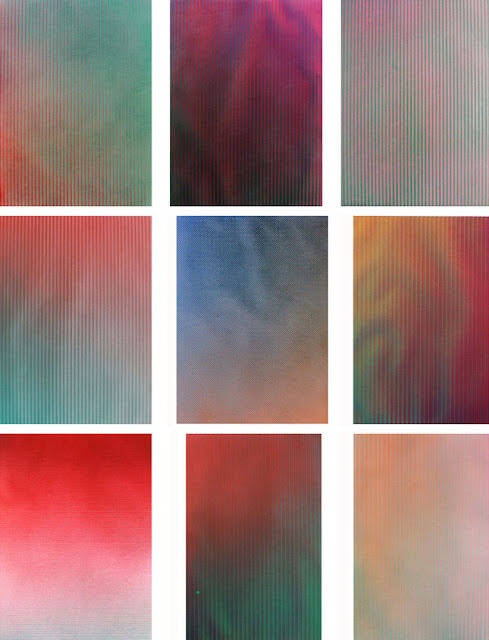 Tauba began by embossing paper.  She wasn’t trying to mimic her fold paintings or any other work. She visited a hardware store and purchased a number of ordinary items, including a wire grid, a rubber mat, textured plexiglass, and chicken wire. She then ran sheets of paper through the press over these objects to create grids, parallel lines and patterns.

The raking color seen in the prints is the result of using an airbrush at an oblique angle against the ridges created by the embossment. She would spray a few layers of paint, wait for them to dry, and then proceed. In some cases when the paper got wet, it began to undulate. Auerbach wanted to record that change, which resulted in a topological record.

Eventually the paper was gently flattened.  Similar to her fold paintings, the undulations disappear as physical forms and remain recorded in the paint.

As she commented in the interview in OKTP, she often destroys a large number of pieces before finding one that works. In the case of these monoprints, she kept only 14 of 30.

In these new works, Auerbach is not trying to exert control over certain elements. The joy is in the experiment. She is comfortable with the idea of the piece, and she either accepts or rejects the finished work. The absence contributes to those that remain. 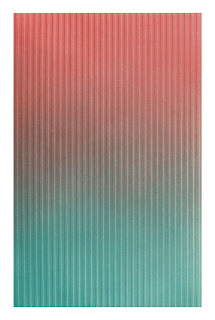 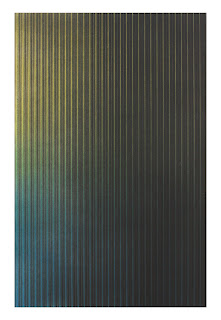