Martin Luther King, Jr. Day has come and gone.  Nevertheless, I thought I would take this opportunity to honor the great man whom we celebrate on this day. This year marks the 25th anniversary of America’s honoring him with a federal holiday. 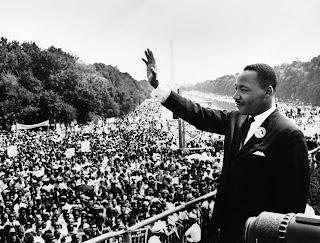 I just got off the phone with my mother, who was recounting where she was on April 4th, 1968. Forty-three years ago this January, she traveled from San Francisco to the Bronx to become a VISTA Volunteer and participate in what had begun with President Kennedy’s and Sargent Shriver’s domestic Peace Corps. program.(Shriver died yesterday at the age of 95.) Kennedy and Shriver’s vision in the early 1960s had led to the founding of a national service corps to help provide urgently needed services to both America’s rural and urban poor.

My mother and many other young and idealistic baby boomers had decided to serve their fellow Americans because they truly believed that a difference could be made that would change racial and economic inequalities in our country. After spending six weeks in the Bronx, my mother and a number of other VISTA volunteers were sent to Newark where they were working in the Central Ward on that fateful day in April. My mom recalls looking out of their second-floor apartment down to the street where policemen armed with shotguns had taken position. The world was expected to explode in response to the nightmare of violence that had taken Martin Luther King’s life, and it did in many communities across America. According to my mother, the fear was palpable for days and weeks.

More than that, it seemed that the civil rights movement, then focused on economic injustices, might be set back indefinitely.  Unbelievably, only two short months later, Robert Kennedy was assassinated. By the beginning of summer in 1968, there was scant light left to lead the idealists. The spirit of an entire generation, and all of America, was challenged in great ways, but King’s life and the strength of all he championed would not, could not, will never be turned around.  His truth survives and continues to transform our nation’s values. With him, we are all still marching towards “the promised land.”

Edgar Arceneaux’s etching “1968” depicts the infamous day.   The sketched figures in the foreground point to the sky, where in the distance the USS Starship Enterprise of Star Trek fame enters the picture frame.  This juxtaposition humorously alludes to the disparate and sometimes conflicting accounts of King’s death.  It points to the absurdity of a still unsolved crime.  The two elements are demarcated by the title “1968,” also the year of the Star Trek episode, Assignment: Earth, in which the Enterprise travels back to earth on a mission to save the planet and its inhabitants.   Another side note is that Uhura, played by Nichelle Nichols, was an integral part of the original series’ multicultural crew and one of the first characters of African descent to be featured on an American television series.  Nichols had planned to leave Star Trek in 1967 after its first season, but following a conversation with Martin Luther King, Jr., she was persuaded to stay.  He helped her realize what an important role model for the black community she would be. 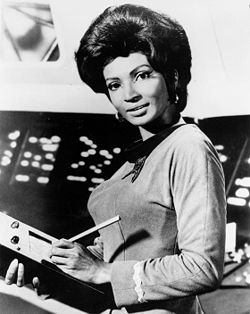 I feel so fortunate to have grown up in a world that has benefited from King’s work, and I am forever grateful to the lovers and the thinkers who came before me who made the quality of my life possible.  I am also honored to work with artists like Arceneaux who continue to examine the past and the present through a truly creative and contemporary lens.

Edgar Arceneaux is fascinated by language, and by establishing unexpected connections among words, objects, places, and people. His installations may incorporate not only drawing, sculpture, and film, but also music, conceptual art, and science, juxtaposing representative elements of each and opening up newfound associations,unintended connections, interstitial spaces—in his words, “a different way to construct relationships among things.”

Arceneaux was born in 1972 in Los Angeles, where he continues to live and work. He currently serves as executive director of the Watts House Project, an “ongoing, collaborative artwork in the shape of a neighborhood redevelopment” across from the historic Watts Towers in Los Angeles; he has been working on the WHP since 1996. He has had recent solo exhibitions at Susanne Vielmetter Projects in Los Angeles and Berlin; the Studio Museum in Harlem, New York; Albion Gallery, London; and Galerie Kamm, Berlin. He received a BFA from Art Center College of Design and an MFA from California Institute of the Arts.

To read an interview with Edgar Arceneaux click here