It was a treat to have Squeak Carnwath return to our studio this past February. She came in with a sense of comfort and confidence as if she were simply picking up where she had left off. Though Squeak is a self-described “painting chauvinist,” she is also a highly adept and creative printmaker. The revelry and material play that characterizes her paintings is also evident in her prints. Like several of her Bay Area peers (Chris Brown and Hung Liu for example), Squeak fully embraces the physicality of the intaglio process, with its drawing-like potential to continually add and subtract information. Her prints employ a wide variety of processes and means of mark-making. During this project, the plate-making involved hardground, softground, scraping, burnishing, sanding, sugar lift, aquatint and some playful chine-collé. Her heavily layered approach to building printed images yields an ink density and visual richness that parallels the sensuous, satin surfaces of her paintings. 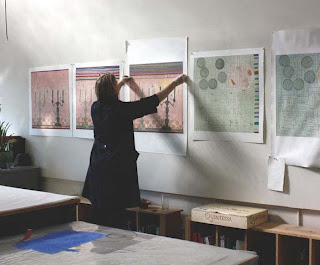 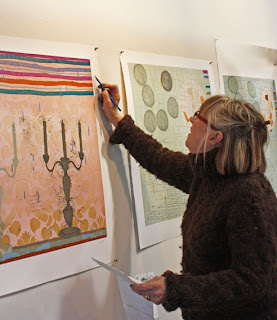 One of Squeak’s greatest strengths is her ability to share her inner emotional world in a way that is remarkably generous and relatable to others. She has consistently managed to touch on themes and issues that affect most people with a specificity that lends them significant weight and resonance. The work serves as a record of her fears, desires, musings and the ongoing self-knowledge she’s gained through the bittersweet solitude of the painting studio. Though her work has an overt stream-of-consciousness style, I was surprised by just how diaristic it really is.

One afternoon towards the end of the project Squeak said that she felt envious of some of her fellow artists who had additional activities and passions outside of their art studios, whether it was making music, playing sports, writing, or dancing. Who hasn’t wondered at sometime what their life might be like if they had made different choices, made different priorities, pursued other interests, and worked at different things. From this discussion she came up with the phrase she included in the print Light: “I wish I did something else (in addition to what I do) but I don’t.” This musing, however, wasn’t an expression of regret so much as an acknowledgement of the decades of focused dedication she’s given to painting.

Squeak was also preparing to undergo major foot surgery and was lamenting the nuisances of aging when she casually turned to me and informed me that she’d be purchasing a gun to give to me, so that I could shoot her like a lame horse when she became too frail or senile to live with the degree of dignity she desired. After a short silence she burst out laughing at my slack-jawed expression before adding, “But seriously, do it.”  This mix of existential dread and humor spills over into the work in a mixture that is simultaneously serious and amusing.

These paradoxes within her work help foil one-dimensional readings of her art. The sweetness of her pastel palette and the child-like imagery frequently belie the gravity of her themes and ideas. The candelabra, while a symbol of creation and a source of illumination, also serves as a memento mori. It resembles some of her older motifs, such as the vinyl LP, in which there is an anticipated end. Yet her attitude towards fleeting beauty and our temporality is not as fatalistic as it may seem. In Not Known, she encourages the viewer to “thrive in the unknown and unknowable.”  This simple statement nicely encapsulates what it means to be an artist; to live in a perpetual state of uncertainty, doubt, and near-limitless choice. Despite the black humor and occasional morbidity, there is an underlying optimism about our capacity to flourish in a world of constant unpredictability.